“Who is the professor having the best research power in YU?” N 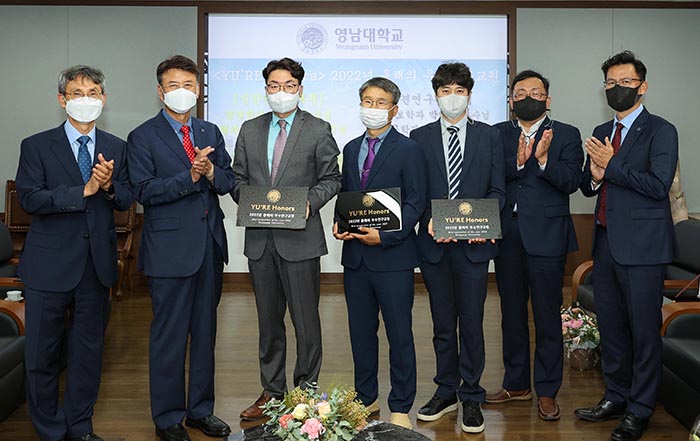 (From the second in the left, President CHOI Oe-chool and professors PARK Joo-hyeon, PARK Han-woo, and YOON Jeong-hyeon)

<YU’RE Honors> was adopted in 2021 to seek for professors who made excellent research performances and inform their performances to the outside and to maximize professors’ research potential with equipment of systematic administrative & financial support system for dedication to researches. Four professors consisting of each two professors in new and middle-level researchers are selected.

President CHOI Oe-chool of YU said, “YU surprised the academic society by ranking 6th in domestic overall ranking in Leiden Ranking 2022 to evaluate universities of the world based on research power. World-level research power of YU was accepted by ranking 55th in world ranking as well as ranking 1st in mathematics and computer area for 8 consecutive years in domestic ranking. Endeavors of professors who have devoted to researches made fruits and accepted by international societies. YU will make active support by constructing educational and research infrastructure and improving systems continuously so that sweats of professors may illuminate.”

Professor YOON Jeong-hyeon, who was selected in new researcher part, obtained doctorate degree of business administration (organizational behavior) in University of Newcastle Upon Tyne under Russell Group of GB and was appointed as a professor by YU in September 2018. Professor YOON was qualified as an Entrepreneurship Education Facilitator by Kauffman Foundation of the USA when he was working as a professor of POSTECH before being appointed by YU. Such qualification means that he may issue certificates of completion in the name of the Kaufman Foundation to students. Now, he serves as an operation member of Daegu Economic Council, operation member of Disaster Fund Management Committee, consulting member of Job Project of the Ministry of Employment and Labor, representative consultant of Gyeongsangbuk-do Job Target Disclosure System, and chairman of Customer Rights Committee of Daegu/Gyeongbuk HQ of Korea Federation of SMEs, etc. He contributes in transfer of excellent technology to enterprises and commercialization of it which is possessed by the university by serving as the chairman of Technology Transfer and Commercialization Center and as the Executive Director of Technology Holding Company. He inserted more than 40 theses and research reports in domestic/foreign main academic journals in the areas of entrepreneurship, technology management, innovation, network, and conflict management, etc. and published such books as Management Organization Theory, ‘Entrepreneurship at a Glance, and Labor-Management Relations Theory, etc. Recently, he received Best Paper Award in SOItmC (Society of Open Innovation, Technology, Market & Complexity), an international academic conference related with technology management & open innovation.

Professor KIM Il-guk obtained doctorate degree in YU and plastic surgeon in YU Medical Center, obtained doctorate degree in KAIST Graduate School of Medical Sciences, and was appointed as a professor of YU in September, 2018. He obtained doctorate degree in KAIST Graduate School of Medical Sciences for the second time in domestic plastic surgeons and served as a clinical lecturer in Seoul National University Hospital. His research power is accepted through many theses inserted in international academic journals such as Cancer Cell which is a worldwide famous cancer journal, JEM (Journal of Experimental Medicine), and Plastic and Reconstructive Surgery which is an OS sciences journal of the USA. In 2019, he reported successful treatment result of an anaplastic large cell lymphoma patient related with breast implant which occurred for the first time in Korea. He had served as the Manager of New Medical Scientists Part of Innovative Physician Scientist Cultivation Project Team and is working as a core researcher of Leading Research Center Support Project as the Principal Investigator of middle-level linkage follow-up research.

Professor PARK Han-woo, who was selected in middle-level researchers, obtained doctorate degree in State University of New York (Buffalo) and, after Koninklijke Nederlandse Akademie van Wetenschappen (KNAW), was appointed as a professor of YU in March 2003. He had served as a Visiting Scholar of Oxford Internet Institute (OII) and Chairman of YU WCU Webbometrics Project Team. He is recognized as a world authority who seeks for political, election, cultural, scientific, technological, and environmental issues hidden in big data by the method of social meaning linkage network. He serves as a consultant and editing member of TFSC (Technological Forecasting & Social Change) and BDS (Big Data & Society). Professor PARK is participating in “YU BK21 + Glocal East Asia Cultural Contents Project Group” and is highly interested in cultivation of next generation of academics and globalization of East Asia.

Professor PARK Joo-hyeon obtained doctorate degree of engineering in Pohang University of Science and Technology was appointed as a professor of YU in March 2000. Professor PARK has been making active research activities including insertion of more than 150 theses in international academic journals for recent three years. Especially, his research performances were recognized by the world as citation count of such theses exceeds 36,700 and more than 93 theses were cited more than 100 times. He was continuously selected for consecutive 7 years since 2015 until last year as “the most influential researchers of the world” selected by Clarivate Analytics, i.e. the researcher who Hs theses being cited at higher 1% level (in terms of number of researchers, Highly Cited Researchers (HCR) who belong to 0.1%). Especially, he was selected as HCR in the most areas (engineering, computer science, and mathematics) for consecutive 3 years from 2019 to 2021 and researchers who were overlapped in 3 areas were 11 persons in 2019, 9 persons in 2020, and 23 persons in 2021; Professor PARK is the only Korean researcher who was selected so. Professor PARK was selected as a regular member of Korea Academy of Science and Technology in 2017 and is working as an editing member in many international academic journals including IEEE (Transactions on Cybernetics).